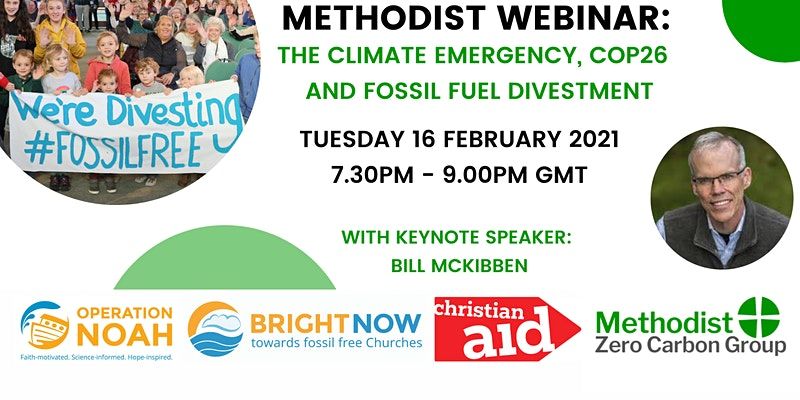 Martha Rand is familiar to those who watch the Grange streamed services, where she participates with Rev. Jo and the rest of her family.  She is also a Methodist Youth Representative, who introduced a notice of motion on divestment policy at Conference in 2020 which was eventually adopted by the Methodist Council in October.

"I want to invite you to a Methodist webinar on fossil fuel divestment on Tuesday 16 February from 7.30-9pm.   The webinar is entitled The Climate Emergency, COP26 and Fossil Fuel Divestment.

The keynote speaker is Bill McKibben, who founded 350.org and started the global fossil fuel divestment movement, and he’ll be joined by Mark Campanale, whose groundbreaking research with Carbon Tracker has highlighted the risks of continued investment in fossil fuels. I will also be giving a short speech, as well as Sheridan Pengelly my co-vice-chair of the Methodist Zero Carbon Group and James Buchanan from Operation Noah. John Howard (former Chair of JACEI, the Methodist Church's Joint Advisory Committee on the Ethics of Investment) will join the panel for the Q&A. The webinar will be chaired by Michael Pryke, Chair of the Methodist Zero Carbon Group and former Methodist Youth President.

The webinar is sponsored by Operation Noah, Christian Aid and the Methodist Zero Carbon Group.

Register to join the webinar here - it's free of charge.  Add it to your online calendar here.

It would also be great if you could pass on the invitation to others in the circuit who might be interested, especially treasurers. I have attached a poster you may wish to share. "